Sachuest Point's claim to fame is its wintering flock of Harlequin Ducks. A walk around the perimeter from mid November through April will almost certainly be rewarded by views of these colorful birds.

US Fish and Wildlife Service.

The refuge is located at the eastern end of Sachuest Point Road in Middletown.

The approximately 2.5 mile hike around the perimeter of the refuge offers views of the ocean and the rocky coastline. The habitat attracts many species of wintering ducks. 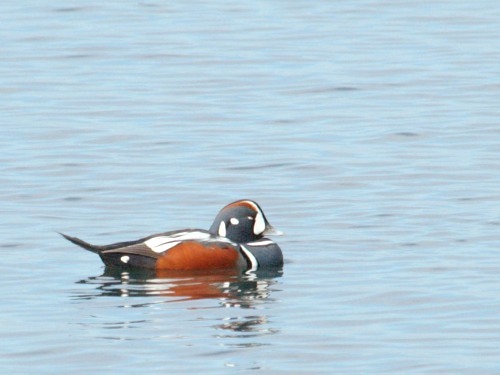 In the winter, Sachuest Point's rocky coastline attracts rafts of Common Eider and all three Scoter species. Harlequin Ducks feed in the surf. Both Common and Red-throated Loons can usually be found offshore along with Horned Grebe and occasionally Red-necked Grebe. Check the flocks of Common Goldeneye for a possible Barrow's Goldeneye mixed in. Razorbills are also a possibility farther off shore. Flocks of Purple Sandpipers can often be seen feeding on the rocks at the edge of the surf. 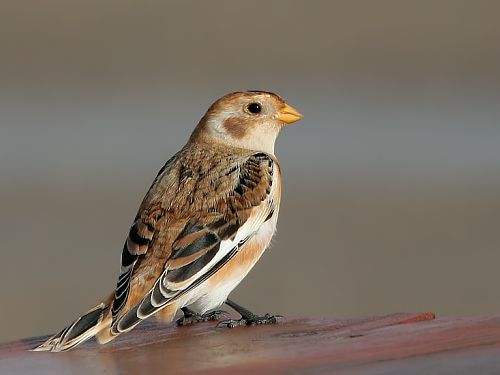 The fields are usually patrolled by a Norther Harrier or two. During some winters, the harriers are joined by a Short-eared Owl or a Snowy Owl. Occasionally, small flocks of Snow Buntings or Horned Larks will feed in the fields. A late Yellow-breasted Chat sometimes shows up in the brushy areas.

The recently restored wetland area at the southern end of Third Beach Road can be a productive shorebird area during spring and fall migration. In addition to shorebirds, Caspian and Royal Terns, and Little Gulls have been seen here. This area can only be viewed from the Third Beach parking area, so, during beach season, it is best to search this area either before 7:00 AM or after 3:00 PM to avoid parking fees.

During the summer Yellow Warblers inhabit the refuge, and Tree and Barn Swallows often feed over the fields.

In the fall and winter, Gardiner Pond Reservoir, if it isn't frozen over, sometimes contains a mixed flock of birds that could include both scaup species, Canvasbacks, Bufflehead, Common Merganser, Ruddy Ducks, Canada Geese and maybe a few Snow Geese. There is a small parking area at the intersection of Hanging Rock Road and Sachuest Point Road.

Also in the fall and winter, Snow Buntings sometimes feed in beach parking lots in the area.